“Confetti Park,” hosted by Katy Hobgood Ray of New Orleans, features music and stories spun in Louisiana. There are skits, poems, clapping songs, interviews, studio performances by local musicians, and a weekly story time. A podcast version of the show is available on iTunes.

“Here in Louisiana, music permeates the fabric of our daily lives and kids integrate naturally with our live music scene,” says Ray. “I hope, through Confetti Park, to showcase the diversity and kid-friendliness of our culture, and also, to show that kids music can be really good. A lot of Louisiana music is naturally kids music—danceable and full of whimsy and fun.” 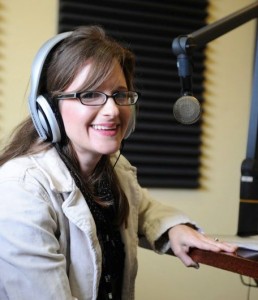 Katy Hobgood Ray is the host and producer of Confetti Park

An announcement on the WHYR website says: “….We could all use some inspiration, imagination, and fun. Luckily, WHYR-LP welcomes Confetti Park, a half-hour of music, stories, poetry, and more starting Sunday, July 17th. Hear Confetti Park on Baton Rouge Community Radio every Sunday at 11:30am, hosted by Katy Ray of New Orleans, for uniquely Louisianian magic that reminds us how wonderful our state can be.”

Ray, who works in communications at Tulane University in New Orleans, has a master’s degree in musicology from Tulane and is a former content producer and host for Red River Radio, an NPR-affiliated public radio network in north Louisiana. She directs a children’s choir in New Orleans called the Confetti Park Players; they won a Parents’ Choice Approved Award for their first album.

With support from the New Orleans Jazz and Heritage Foundation and Music Rising at Tulane University, Katy traverses the state to unearth music and folktales, local legends and spooky stories, colorful family memories and forgotten histories. For the weekly segment Confetti Park Storytime, she features published children’s authors as well as interviews and encounters with everyday people on the street. Children’s voices are often used to share poems, contemporary jump rope jingles, hand-clapping games and other playground chants.

“Confetti Park” debuted in New Orleans on WHIV in April 2015. It currently airs in Hammond on KSLU and is available to all Louisiana community radio stations.