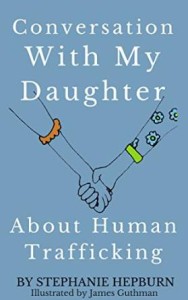 Conversation With My Daughter About Human Trafficking by Stephanie Hepburn

Stephanie Hepburn is a writer living in Louisiana. She is a weekly and monthly contributing writer to the New Orleans Times-Picayune and regularly contributes to other news outlets. Her most recent book, Human Trafficking Around the World: Hidden in Plain Sight, was released by Columbia University Press in June 2013.

Stephanie is an advocate for her fellow human beings, and works to help others not only through journalism, but also through activism and entrepreneurism. She recently founded Good Cloth, an ethical online clothing shop, as her way to make change in the garment industry and spread awareness on the topic of labor exploitation in a positive way.

Stephanie is the mother of two children, and has given much thought to how to talk about the difficult topic of human trafficking with kids.

We want to believe that trafficking can’t happen where we live, but it can and it does because it happens everywhere. Traffickers go to the same places we do, I tell her. They go where there are a lot of people like malls, schools, buses and train stations, and they use Facebook and other Internet sites to try to meet the people they will hurt. They can use classmates at school to recruit and find people to traffic. My daughter is little and this seems unreal, but it happens and we need to talk about it.

Stephanie has created this piece, Conversation With My Daughter About Human Trafficking, for Confetti Park (it also appeared in Huffington Post). You can download the eBook for free this week from Amazon.com.