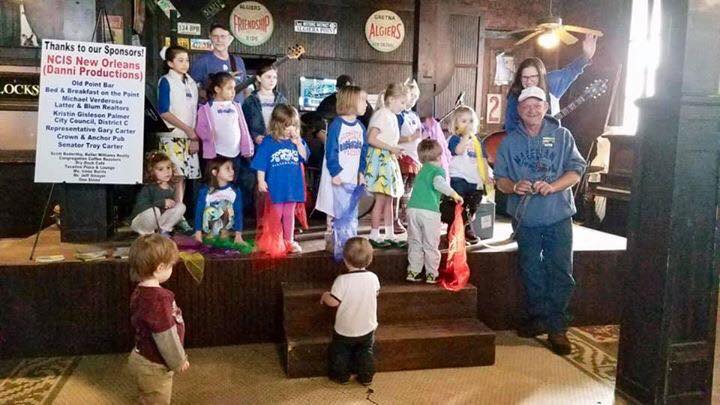 In Algiers Point, we interact with the great river every day. We use the levee for exercise—biking, skating, walking our dogs. We use the ferry boats to cross to Canal Street on the other side-—every half hour it comes and goes. Our children grow up on batture when the water is low, playing with sticks and swinging on rope swings near the water’s edge. Collectively, we revere the great sunsets and honor the sweet life on the Mississippi River.

So we weren’t going to miss the sight of a houseboat parked along our bank. And I think that is how most of Algiers Point first discovered the story of Mr. Kelly. I wonder how he was discovered in other cities.

Mr. Kelly Phillips, who is originally from Wisconsin, was diagnosed with terminal cancer, and given three months to live. Rather than enter hospice, Mr. Kelly chose to get a houseboat and live out his final days on the Mississippi River. This was in early 2016. From the AP And guess what? Three months went by… and he was still alive. So Mr. Kelly decided to move south along the river. He left Madison, Wisconsin, on March 15, 2017. From ABC News

His companion in his Mississippi journey is a first rate first mate named Sapphire, an adorable little black pug.

All along the way, Mr. Kelly’s journey has captured the hearts of people who live along the Mississippi River. And he has made many friends, and had many adventures.

From Michael DeMocker’s essay in the Times Picayune: “Phillips’s months on the Mississippi were frequently challenging. From an exploding can of chili to getting the boat stuck in ice to collisions with rock jetties and even a cargo ship at anchor, “Shameless” and its captain weathered many potentially disastrous trials.'” And from WREG: “While trying to dock in St. Louis in the winter Phillips said he stepped onto an icy dock and fell into the freezing water.

There were challenges–but most of all, there were inspirations. The stories Mr. Kelly shares are stories of the goodness of people.

Example, in Memphis, Tennessee, when Sapphire went missing, truly goodhearted people in Memphis helped them reunite. And once they heard his story, these same people bought Mr. Kelly a generator and a new phone. From WREG and another take from Little Things.

Here he is in Vicksburg … Natchez … and Baton Rouge.

When he landed in Algiers Point, neighbors started sharing pics of Mr. Kelly’s houseboat, and it wasn’t long before his story was known across our little village and he was embraced into the fold of Point life, enjoying a pint at the Old Point Bar, coffee at One Stone, and trading stories with our people.

Last week, the Confetti Park Players were so honored to sing a song of joy to Mr. Kelly, at STEPFEST, a neighborhood concert fundraiser for a public art project celebrating Algiers Point’s tricentennial. Mr. Kelly and Sapphire were guests of honor. Greta and Tyler Hayes, whose daughters are both Confetti Park Players, coordinated the dedication.

We sang “Let’s Go Riding on the Mississippi River” to our new friend.

And then, all of us, the whole room, sang “You Are My Sunshine” together with Mr. Kelly. It was truly a sweet afternoon.

A few days later, Mr. Kelly set out for his final destination: Venice, Louisiana. We are so thrilled that he made it!

Many of his “river friends” who he’d met along his journey attended a river party to celebrate him on Saturday (Jan. 26), including some Point Algerines. Among the guests were Lt. Gov. Billy Nungesser, who said: “We want to make sure we extend the Louisiana hospitality to anyone, especially a guy with a story like this, that given the remaining time he’s got left, he’s sees that he’s got friends.”

Here is a story about his celebration by Michael DeMocker, who has been documenting much of Kelly’s south Louisiana journey.

And here is the greatest lesson Mr. Kelly has shared from his adventure along the Mississippi River:

“People are good. Period. All over. My friends from New Jersey who helped me get this far, all the people down the river, it’s all about them…I did the journey but it’s about the Mississippi River people…..I hope heaven’s like this.”

Storytime: The Littlest Engine That Could by Justin Wilson